By Esther Pasztory of Columbia University

Can one accept the idea that Ancient American Indians were better nourished, lived in better housing, less threatened by devastating wars, having some say in their society’s functioning, and kept busy with arts and the building of colossal monuments? And all this having mainly stone tools? In fact almost as well, or better, than the European cultures that conquered them. That is where current thinking is tending.

When the Americas were conquered in the sixteenth century, they were seen as backward: they had mainly stone tools, little metal, no horses or cattle, did not know the wheel, and only had limited writing. They had human sacrifices, which made them evil and justified their conquest by Europeans. In the twentieth and twenty first century incremental archaeological and library research has demonstrated that ancient American cultures and arts were remarkably complex and sophisticated. Many of these discoveries were listed in” 1491” a book by Charles C. Mann (2005), which recounted amazing accomplishments for a popular readership. Now, it seems, that actually it may have been a good time to have lived.

The explanation both for Eurasian “advancement” and New World “backwardness” is in geography and history. The accelerated Eurasian development of Stone to Bronze to Iron to Steel technology was a result of technical innovation among about five major centers of civilization in contact and conflict with one another. Both contact and conflict spurred innovation necessary in insecure warlike times. Competition also drove exploration and discoveries near and far.

By contrast, the Americas only had two areas of high civilization, minimally in contact with one another. Mesoamerica was in no danger of conquest from the ancient Andes or vice versa. As both areas had a stone technology – adequate to basic building and warfare- metal technology was not developed for tools and weapons. As there were also no seafaring or horse-mounted predatory cultures terrorizing the settled population, there was relative peace. Energy was focused on building spectacular colossal structures like roads or pyramids within the given technology.

Instead of emphasizing technological development, Ancient Americans apparently focused on human engineering – various ways in which people were incorporated in society in positive ways, so that they participated in the grand building projects pretty much willingly. Their incentives were likely to have been religion, food, shelter, festivity, inclusion and identity assertion. There appears to have been an emphasis on a collective ideology even when society was clearly ranked. 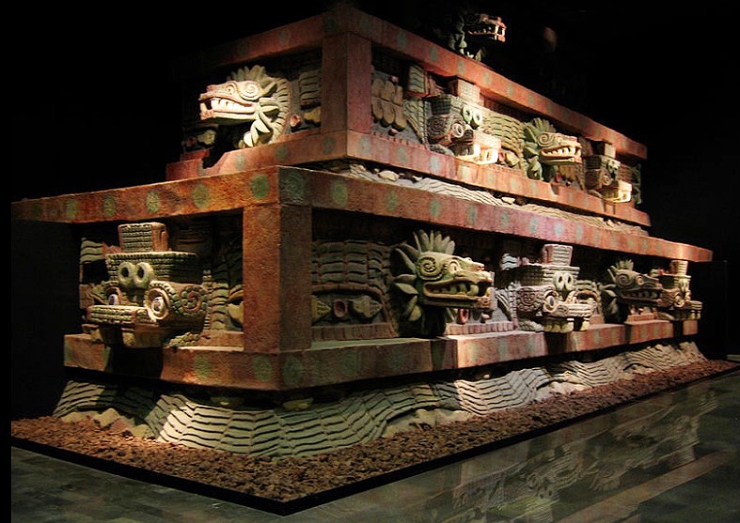 How did this idea of the “collective” originate? While it may be far fetched, one possibility is, that it goes back to Prehistoric times to the peopling of the Americas. The Americas were empty of humans until about 20 000 years ago when there were a series of migrations from Northern Asia and possibly Polynesia. The land was lush and unspoiled. The early migrants hunted the great Pleistoscene animals, such as the mammoth and sloth. These huge creatures were best hunted by cooperative groups. Even when the Pleistoscene fauna died out, the land of the Americas was rich with smaller game and a great variety of plants some of which were eventually domesticated. There was plenty of space and food for everybody and it was easy to move.

By contrast, the move of homo sapiens into the Near East, and Europe from Africa was fraught with conflict with other groups of somewhat different early men such as the Neanderthals. In order to succeed, early Eurasians, fought and competed even though they also intermarried with these other groups. Very likely they developed an ideology of conflict and conquest. Ancient Americans, by contrast, may have passed down more cooperative ideologies for social organization. While this worked for them in their isolation from the rest of the world, it was of no use when confronted by a metal-using predatory culture, like that of Europe, looking for gold and territory.

What is the proof of all of this? Certainly, that is not how the Spanish chroniclers saw it. The information is largely in the monuments and achievements themselves as analyzed by recent studies. Take the site of the city of Teotihuacan in Mexico with its pyramids rivalling the pyramids of Egypt, its population of hundred thousand living in masonry apartment compounds often with fine mural paintings “palaces.” No standing army or police. No institutionalized slavery. No pharaoh-like images of rulers or royal burials. People in ranked kin groups organized apparently for colossal building projects. Whether it is ostensibly for religion and the gods, it also expresses pride, optimism and the kind of accomplishment in a stone-using culture that the landing on the moon was for our scientific and technological culture.

In another model, the Inca state is said to have parceled out land to every person in return for labor service to the state, with the land returning to the state upon death. The system was based on the idea of reciprocity; although, like any other system, it could have been exploited. One labor service task was the building of walls in which each stone, sometimes colossal, was rubbed against the other for perfect fit. Another was a three thousand mile long road system. There are hundreds of fantastic ruined sites and buildings in Ancient America that attest to imaginative designs, careful orientation, precise carving detail and construction finesse that suggest, commitment, care, belief in the present and the future, great patience. Within their own traditions, these are rarely slipshod or sloppy, surviving nearly intact for more than a thousand years.

In order to see Ancient America in a positive light, we must come to terms with the human sacrifice also practiced. This isn’t all that hard if we think of human sacrifice as a particular form of violence homo sapiens has practiced at all times and places. For reasons that are obscure, we accept enormous body counts as justifiable in war. Millions, even billions, died in WW I and WWIi, the Vietnam war, the atomic blasts over Hiroshima and Nagasaki and other wars throughout the centuries. We speak of the “sacrifice” of young men metaphorically, but their “sacrifice” in war is a kind of human sacrifice. Millions of people have been killed in genocides to keep ethnicities and or religions pure.

Ancient American warfare was not terribly lethal or long because of the simple weapons used and the difficulty of supplying troops with food on campaigns. The Mesoamerican solution, naturalized by religion, was to take live prisoners and sacrifice them later. The limited number of human sacrifices were largely symbolic – the body counts of more “advanced” civilizations were more literal destructions of entire peoples focusing increasingly on the civilian population.

Because we are familiar with stone age cultures in modern times in poor and marginal areas we don’t realize that given rich natural resources, time and space, stone age peoples of the New World once created great and reasonably humane civilizations. It is slowly emerging that the ancient American monuments were built by an alternative stone age that is some ways might have been superior to its conquerors.